We've adapted our Cheese and Bacon scone treats to a lower fat recipe, ideal for healthy eating, whilst still being able to enjoy your favourite treats. Most supermarkets and shops stock 30% less fat cheese which is still packed with smooth, rich flavour. We also chose lean, locally farmed bacon to complement our home baked delights. This easy recipe makes 12 scones: 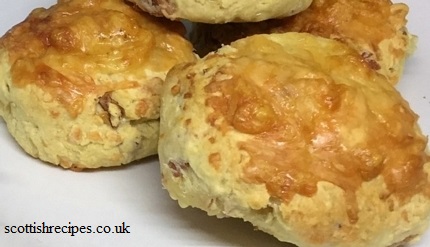 
Fry the bacon until crispy. Place on paper towel and chop into chunks.

In a bowl mix flour and mustard powder. Rub in butter with fingers until it resembles breadcrumbs.

Whisk the egg and milk together and add to the bowl a little at a time until it comes together as a dough.

Roll this dough until approximately 2.5cm thick. Cut into 12 scones. Brush top with milk and sprinkle with cheese.

Bake in the oven for 18-20 mins until they are golden brown.

They are tasty eaten straight out of the oven for a winter warmer treat.