This carrot loaf recipe came from an ingredients challenge on our social media using those in the photo below. We cheated a little and added some eggs and vegetable oil. It's based on zucchini bread, with the substitution of carrots. 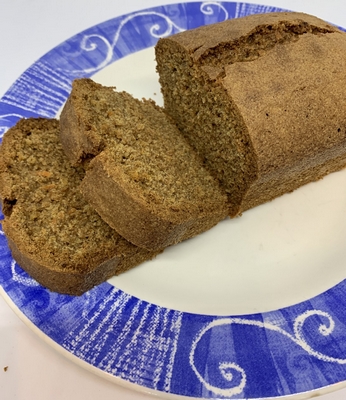 2. Sift the flour, salt, baking powder, soda and cinnamon together into a bowl.

3. Beat the eggs, oil, vanilla and sugar together in a large bowl.

4. Add the sifted ingredients to the creamed mixture and beat well.

5. Stir in the carrots until they are combined well. Pour this batter into the prepared tin.

7. Remove the carrot bread from the pan and set aside to completely cool.

8. Store the carrot loaf in the refrigerator. It will also freeze well.