Clootie refers to the cloth that this suet and fruit pudding is traditionally made in. Delicious served hot with jam and/or cream or custard. Leftovers can be fried in a wee bit of butter to re-heat. It can be made using bowls. 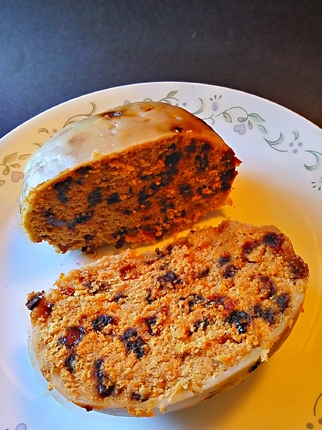 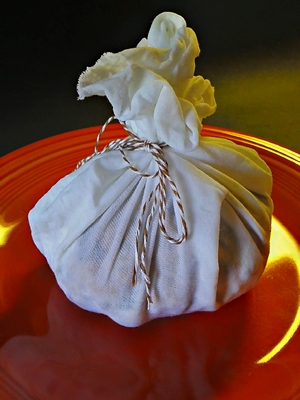 How To Make Clootie Dumpling


1. Rub the suet into the flour and add oatmeal, baking powder, sugar, sultanas and currants and the ginger and cinnamon. Blend together and add the eggs and syrup. Stir well and add just enough milk to firm.


2. If you are using a cloth (cloot), put it into boiling water first then spread onto your table and sprinkle a liberal amount of flour over the inside. Put the mixture into the middle and tie up, leaving a wee bit of space for the mixture to expand.


Taste Ye Back: Great Scots and the Food That Made Them describes how the traditional skin is formed by the sprinkling of flour and sugar into the cloot cloth before it is filled with the mixture. The clootie dumpling skin would have traditionally been dried in front of the open fireplace though modern cooks may now do the drying of the skin in the oven. Though the actor and entertainer John Barrowman (Captain Jack Harkness in Torchwood) describes his mum's way of forming the skin on their clootie dumpling as each family member taking a turn to slap the dumplings bum prior to it going into the pot of boiling water!


Traditionally silver pennies would be added to the Cootie Dumpling mixture. Sue Lawrence in her book Scots Cooking: The Best Traditional and Contemporary Scottish Recipes suggests wrapping 5p pieces or charms in waxed or greaseproof paper and adding these to the mixture which Sue spells as Cloutie Dumpling.

suggests using an old pillowcase or a square of muslin as an alternative for the cloot.


3. Place an upside-down saucer at the bottom of a deep pan and put the tied cloot in and cover with boiling water and simmer for about 3 hours. The saucer stops the cloot sticking to the pan.

4. If you'd rather use a bowl it will need to be greased before adding the mixture. Leave an inch space at the top for the pudding to expand. Cover with greaseproof paper and tie. 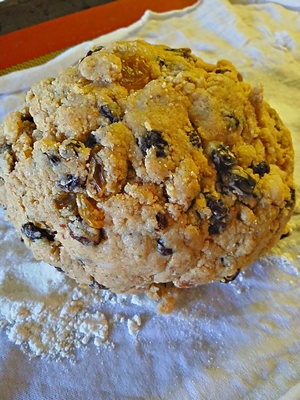 
I am often asked how long will Clootie Dumpling keep for and stored? It never lasts long in our household because we love to eat it quickly! However many chefs and bakers recommend no longer than two months depending on the conditions it is kept.


Scottish Recipes are always happy to answer questions about Clootie Dumpling. Here is one example:

How do I get a skin to form on my clootie dumpling?

The skin is formed when the pudding dries out. Different chefs have differing ways on how to form a skin on clootie dumpling. Some like to sprinkle it with caster sugar and put it into a warmed oven at about 100 C for 20 to 30 minutes or until the shiny skin forms. Others still prefer the traditional method of drying the clootie dumpling in front of the fire. However few homes have the old fashioned kitchen ranges and coal fires needed so the moderate heat of the oven is needed with or without the sprinkling of the caster sugar. Patience is also needed to form the skin, so do let it cool down on your kitchen table.

has a Scottish suet pudding recipe much like the above clootie recipe though it uses self raising flour instead of plain flour and additional ingredients such as bread crumbs, a grated apple, brown sugar and nutmeg. Maw calls it the Daddy of all the puddings. Next to it is a Broons cartoon strip where the bairn substitutes Grandpa's laundry bag for the cloot!

. Maw Broon suggests serving it hot with syrup or cold with a cup of tea.


Clootie Dumplings are traditional rich fruit puddings which are cooked in a cloth called a cloot. It was traditionally made for special occasions like a birthday, Hogmanay or at Christmas time when trinkets, coins and lucky gifts were dropped into the mixture, wrapped in greaseproof paper. However it is now readily available and enjoyed throughout Scotland and some parts of the world by ex pats at any time of the year. It is particularly enjoyable in the winter months when it can warm many a cold belly! It is especially filling on New Year Day to soak up excess alcohol!

It is best served hot with cream, ice-cream or custard and left overs can be fried the next day and served with bacon and beans. 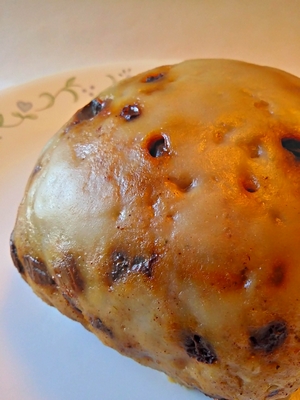 It can also be eaten cold, spread with butter or margarine and jam, much like a tea cake.

The cloth used to cook a clootie dumpling is often called a cloot or a clout. It is sometimes called Cloutie Dumpling.

It is possible to buy a ball shaped metal steamer which make it easier to cook a clootie dumpling so that it retains the rounded shape. These are getting harder to find though and tend to be available second hand or handed down by relatives. If I can source a shop that sells clootie dumpling steamers I shall put the link here. I shall also try and find an electric one.


Other types that have been made over the years include a Clootie Dumpling Christmas cake, Wedding Cake and various flavours such as rum, walnut and almond. At many craft fairs around Scotland you can buy whole or individual slices. Many Scottish supermarkets like Tesco and Morrisons sell individual portions which are usually found by the sausages, haggis and fruit slices.


A Scottishrecipes.co.uk visitor needs some help. Her mother has always made cloutie dumplings for birthdays and special celebrations but needs a new cloutie cloth. She had been using old flour bags which were bleached and then boiled. Now she has asked her daughter to find a new clout. Can anyone give her any advice on what type of fabric to use or where she may purchase the right type of cloutie cloth so that their family tradition can continue.

Below are online shops where you can buy clootie dumpling and have it delivered throughout the UK or worldwide where listed:

Campbell's Clootie Dumplings of Edinburgh use a family recipe that originated on the Isle of Skye in the mid 1800s. Each traditional Scottish recipe clootie dumpling is encased in a traditional cloot and can be gift wrapped. Shipping is available worldwide and more details can be found at www.campbellsclooties.com


A 454g one that serves 2 to 3 people can be purchased online at The Scottish Store who export Scottish food worldwide. Visit www.scottish-haggis.net or call 01786 812551 to order.

A Scottish Recipes reader is trying to find a bespoke cloth for making clootie dumplings, made from cotton and calico fabric with the recipe printed on the cloth. If you sell one or know of a company that sell clootie dumpling cloths then please contact ScottishRecipes.


Below are stockists of clootie dumpling cloths:


In 2015 Cara Currie chose clootie dumpling instead of a traditional wedding cake for her big day. She had starred in TV adverts for the dish as a child for her parents, Gaye and Joe Broadley, family business Studio 66A.

It is also spelt as Cloutie Dumpling in The National Trust for Scotland book The Scottish Kitchen by Christopher Trotter though he calls the cloth a cloot.