The high fat occasional treat of a deep fried mars bar popular in Scotland easily made at home with this recipe.

Though not a traditional Scottish recipe we have included this deep fried mars bar recipe because we get lots of requests from readers. It is not at all healthy and is often described as a heart attack on a plate! However it seems to be popular here in Scotland and is gaining followers down south, with London restaurants selling them as a pudding treat.

Two chip shops claim to have invented them and we shall let them battle it out between themselves. These are the Carron Fish and Chip Shop in Stonehaven, Aberdeenshire (formerly called The Haven) and a Glasgow chipper in the Hillington area. Both claim that local school children enjoying them as a lunch time treat raised their popularity. 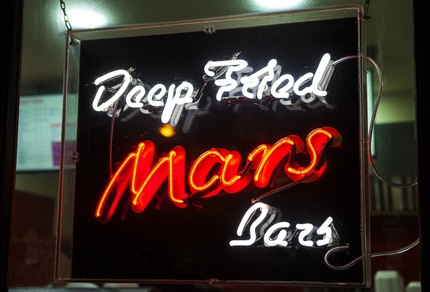 Here is our deep fat fried mars bar recipe which we have tried to make as low fat as possible. It gives a lovely chocolately gooey middle with a crispy coating.

1. Beat a raw egg in a bowl and then dip a full size mars bar that has been kept in the fridge until all of the chocolate coating is covered.

2. Put this into a batter mix. We use 1 cup of plain flour with half a cup of corn flour and a pinch of baking soda mixed in with milk until a consistency of thin cream is obtained with no lumps. A lighter batter can be obtained if you use beer or soda water instead of milk.


3. Once coated gently lower into the fryer and fry until it turns crisp and golden brown.

4. Set aside on kitchen roll to drain the oil off and when ready sprinkle with a little cinnamon and sugar mixture. Serve with ice-cream.

5. Share with a friend to reduce the risk! The above can be done with other chocolates. For example in April May time some takeaways serve deep fried cadbury's creme Easter eggs. Others use milky ways.