This delicious Chicken Goujons recipe uses oats rather than traditional breadcrumbs. It's a great way to get children to eat healthier.

Though the chicken goujons in oats in our photos do not look too appetising they do taste lovely with a wonderful crunch and delicious herb flavour. 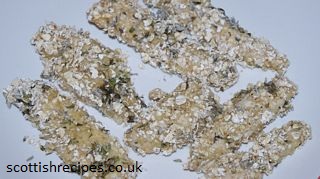 
How To Make Chicken Goujons

Mix the chopped thyme and a little garlic grain pepper with the porridge.

Dip the chicken into the beaten egg and roll in the oats until coated all around.

Place them onto a lightly oiled baking tray leaving space between each one, and bake at gas mark no.5 (190oC) for 20 – 25 minutes until they are cooked through and the juices run clear.

Serve with a dip and some salad.

We would like to thank Sainsbury’s for this Chicken Goujons recipe and photograph which formed part of their Eat Britain campaign. To read more about it visit the Scottish Cooking And Recipes From Scotland page.