Cranachan is a traditional Scottish sweet dessert served with raspberries. It is also spelt Crannachan. It is traditionally served in Scotland at the New Year and at some Burns Night Suppers. It is sometimes called Cream Crowdie. This Cranachan recipe will serve four people: 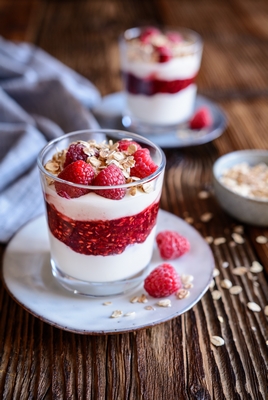 describes how it would be traditionally eaten in rural Scotland at harvest time. At the table there would be separate bowls with cream, crowdie (skimmed cottage cheese), raspberries, brambles and blueberries, toasted oatmeal, heather honey and whisky. Each person could then make their own cranachan recipe to their own taste.


Scatter the oatmeal onto a baking tray and toast in a low oven or under the grill until they become golden brown. Do stand and watch this because they can easily and quickly burn.

advises toasting the oatmeal with a half measure of sugar together to give a crunchy texture and caramel flavour. This is done either under the grill or with care in a non stick frying pan using a medium heat and tossing often. Nick Nairn uses pinhead oatmeal and uses soft brown sugar. He also recommends tossing the raspberries in whisky and warm honey for an enhanced flavour. Once prepared he then drizzles any extra whisky with the warmed honey over the Scottish cranachan.

Blend 50g of the raspberries in the liquidiser until they become smooth.

Whip the double cream until a stiff mixture forms.

Stir in the honey and the whisky and mix well. Do use a good quality malt whisky to enhance the flavour. We have found Glenlivet, Macallan, Glenmorangie, Glenfiddich, Isle of Jura and our local malt, Glen Garioch to be particularly tasty. We use a different malt each time we make Cranachan with raspberries to enjoy a new taste.

Spoon the mixture into tall glasses or individual serving dishes. Gently scatter the remaining oatmeal and raspberries on the top of each dish.

Serve and enjoy as a pudding. 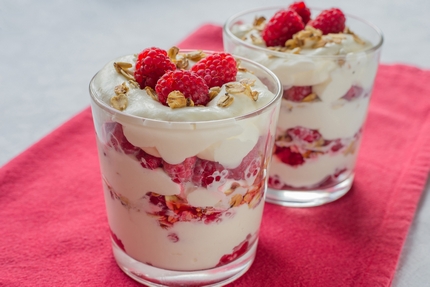 Scots Cooking: The Best Traditional and Contemporary Scottish Recipes by Sue Lawrence recommends preparing it as it is about to be served so that the oats do not loose their crunch. Sue Lawrence has a slightly different recipe for Cranachan which uses jumbo oats, light muscovado sugar and mascarpone cheese. Sue gives the wonderful idea which she got from Scottish food historian Catherine Brown that Cranachan ingredients be placed in separate bowls at the table so that each can add their own ingredients. That way children can enjoy it with more honey and no whisky.

has a Cream Crowdie recipe much like the one above though it uses rum or vanilla seeds and additional ingredients such as castor sugar and fresh seasonal berries.

has a recipe for Cranachan with caramelised oatmeal and raspberry sauce for with Delia recommends using frozen raspberries.

The Three Chimneys restaurant on the Isle of Skye has been the best cranachan that we have ever tasted. If you have a photograph that you would like to add to this page then please contact me.

A curry variation was made by Anjum Anand and Edinburgh cookery demonstrator Wendy Barrie for the BBC 2 programme Indian Food Made Easy. They called this Punjabi Cranachan and other dishes from India cooked were Tarka Dal and Chicken in Spinach.