Clapshot is a traditional Orkney recipe of tatties (potatoes) and turnips (neeps - the purple headed orange variety) and is usually served with haggis. It is sometimes called Clapshaw or Orcadian Clapshot and traditionally made in one pot. The book Scots Cooking: The Best Traditional and Contemporary Scottish Recipes by Sue Lawrence describes the Northern Ireland equivalent as Champ and the Southern Ireland dish Colcannon. 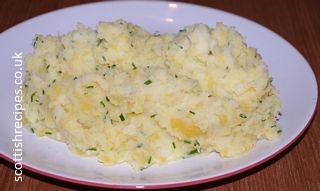 has a tasty Clapshot shepherd's pie recipe whilst The National Trust for Scotland book The Scottish Kitchen by Christopher Trotter has a clapshot cottage pie recipe.


1. Boil the tatties and turnip in separate pans and then drain.

2. Mash the turnip and tatties together adding the butter.

3. Stir in the chives and season with the salt and pepper 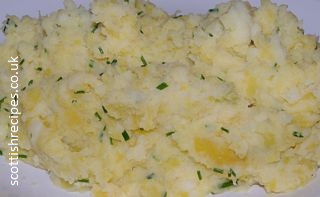 The book A Cook's Tour of Scotland

by Sue Lawrence has a Clapshot Soup with Haggis Croutons recipe which uses fresh ingredients or can be cooked with leftovers.


The Book Maw Broons Cookbook has a Clapshot recipe which includes the use of additional vegetable ingredients such as turnip and onions. Buy Maw Broon's Cookbook at a discounted price and with free delivery available.

by Si King and Dave Myers has a tasty recipe for clapshot haggis and whisky sauce. They have additional ingredients such as double cream and suggest cooking the haggis in its own juices wrapped in aluminium foil. 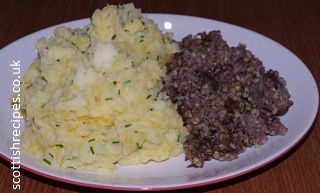 A Cook's Tour of Scotland by Sue Lawrence suggests using turnips and cooking them for your clapshot recipe in milk for a creamier taste or adding a peeled chopped onion with the potatoes for extra flavour. It also describes the Hagshot Pie that she bought at the Kirkwall butchers Donaldson & Sons. She describes it as a Scotch pie filled with haggis and topped with clapshot.