This tattie soup recipe is cheap to make and really filling. The secret to a good thick dish is preparation and the use of a good base stock, though modern cooks may prefer to use cubes bought from the supermarket. 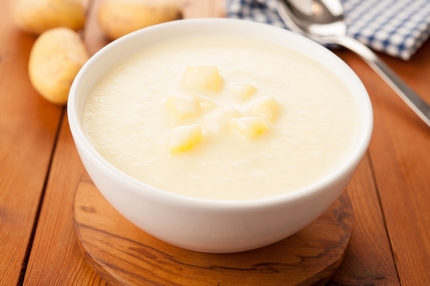 
The book Scots Cooking: The Best Traditional and Contemporary Scottish Recipes by Sue Lawrence describes how mutton would have traditionally been used but her tattie soup recipes now suggest the use of chicken stock which is more readily available. Sue Lawrence also suggests adding a handful of chopped young nettle leaves a few minutes before serving. If nettles are not available then she uses chives or parsley for the garnish.

For those who would prefer to cook a traditional Scottish tattie soup recipe then we will start by explaining how to make stock from bones.

How To Make Soup Stock


It is easy to make soup stock though a little messy and time intense. Many cooks use left over carcasses from chicken or joints such as lamb or in olden days beef. Others use raw bones from the butcher. Whichever is used place the bones in a large saucepan and cover with water. Add the seasoning and bring to the boil and then simmer. During this time skim off the fatty scum and discard.

After about three hours add the finely chopped vegetables and simmer for another two hours. Still keep skimming off the fat that rises to the surface of the pan.

Remove from the heat and sieve the liquid into a new pan. Throw out the bones and vegetables. Please don't be tempted to keep the veg for future meals, it will be tasteless because all the goodness is now in your stock. 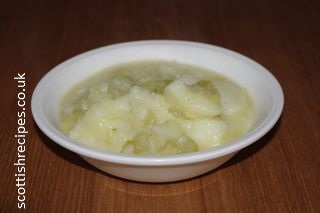 How To Make Tattie Soup


Now that you have your basic stock we will guide you through how to make tattie soup. Do use the best ingredients you can afford; good quality potatoes and other vegetables are a must. Other names are potato soup or tatty soup.


Four large chopped and quartered potatoes.
One finely chopped leek and onion.
Two stalks of finely cut celery.
About 200mls of milk.
50g of butter.
Seasoning of salt, pepper, a bay leaf and fresh parsley for the garnish. 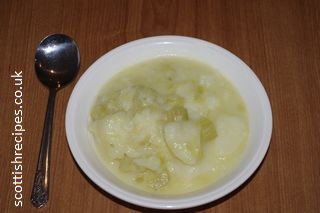 
Prepare the vegetables by peeling, washing and chopping the potatoes, celery, onion and leek.

Melt the butter in a saucepan over a low heat.

Saute the onion until it goes yellow brown and soft.

Add the other vegetables, including the potatoes, and place the lid over the pan and continue to saute the veg over a low heat for about ten minutes to soften them.

Add the stock, seasoning and bay leaf. Bring gently to the boil then reduce the heat to simmer for about an hour. Remove the bay leaf.

Add the milk and if needed another 50g or 100g of butter depending on your preference. Turn up the heat but not enough to boil, just enough of a temperature to warm back up the mixture.

Serve and garnish with the parsley and enjoy with your favourite bread. 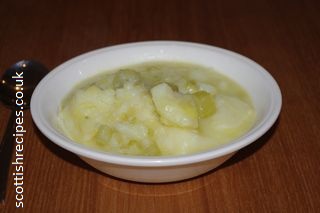